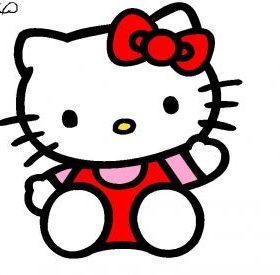 In one of the most shocking reveals of all time — more than empty tombs and Elton John's 1988 announcement that he's *gasp* gay, the powers that be announced today that Hello Kitty is, in fact, not a kitty.

Bull. I mean, no, she's not a bull. I just mean...bull. Whiskers, ears and clear ennui over her human counterparts. Cat. Cat cat cat.

But I love a good pr stunt, so BRAVO (truly) to the public relations geniuses at Sanrio, who timed this announcement perfectly. The world was waiting on breaking news that didn't involve police violence (thank GOD it's finally in the news; yes, there's obscene racism in America and the more it's in the news, the more it becomes part of our psyche and nags, nags, nags at us until we do something!!) and ice buckets (sending love to Anthony Carbajal, whose video really is the only ice bucket challenge vid you need to see). P.S. Listen to the man and donate here.