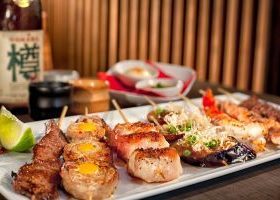 I eat noodles; I eat the heck out of noodles. Noodles noodles noodles. And Asian food. Ah, Asian food. Sometimes my husband tells me I was once Asian — in another life. When Gaijin Noodle + Sake House opened a year ago in San Diego’s Gaslamp District and photos of sake snow cones (kakigori cocktails), yakitori and the requisite bowl of drunken noodles began circulating, I succumbed. I made a reservation and counted down the days to bliss.

And it came. Bliss, that is. In the form of Uni Green Tea Soba Noodles swimming in fresh lobster dashi made from scratch by the wonderful Antonio Friscia, yakitori of quail egg wrapped in bacon and Swiss cheese and the most delectable bao buns of carnitas, red rock sugar, sunomono and peanuts. I quickly fell in love with the black sesame kakigori cocktail. It was a memorable meal. And I returned — with friends — to show off this gem.

A year after its opening, it gives me great pleasure to announce that PlainClarity is now representing Gaijin Sake + Noodle House. Further, after meeting the exceptionally hard-working, creative and intelligent partners at The West Group, the hospitality management company that, with Chef Antonio, launched Gaijin, we were asked to promote the entire group, including lively Bar West, Pacific Beach’s only true nightclub. Bar West just began serving Oscar’s Mexican Seafood, a Bird Rock taco shop with a cult following, to famished club-goers and it launched a new culinary cocktail program by the ever-talented Snake Oil Cocktail Co, which has several times provided cocktails at the Sundance Film Festival and for Aston Martin, among other prominent brands.

We are extremely excited to represent these quality brands. We wholeheartedly believe in The West Group’s philosophy and admire the partners, who continually strive for personal and professional growth and who, similarly, provide growth opportunities to their employees. These individuals work rigorously to create the best dining and nightlife experiences for their guests. Applause!!