Meet our interns, meeting each other 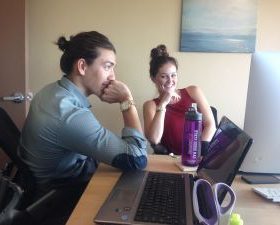 Nothing breaks the ice with a fresh set of interns better than having them answer questions about each other’s lives (without actually knowing each other). Meet our two new interns for the Fall 2014 semester: Derek Shelton and Michelle Millsap, both seniors at San Diego State University. We asked them a series of questions after knowing each other for a few short hours and asked them to guess how the other would answer.

Derek: Emo Purple. She just has that brooding vibe.

Michelle: Dodger Blue (but seriously, who likes the Dodgers?!)

What do they sing when nobody’s watching?

Derek: Anything Katy Perry sings, or she just sings sorority songs over and over.

Michelle: Nicki Minaj’s “Anaconda”. I bet he dances to it too.

Who is their celebrity crush?

Michelle: Kate Upton? Someone blonde and easy on the eyes.

Derek: Night owl, for sure. She seems to like it better when it is dark out (like a vampire...should I be concerned, actually?)

Michelle: Night owl, definitely. I can tell he doesn’t need much sleep.

What’s their favorite thing to do at the end of a long, exhausting day?

Derek: Drink wine while watching the Kardashians. Probably even rerun episodes saved from her DVR.

Michelle: He strikes me as a bubble baths and Pinot kind of guy.

Derek: “The Notebook," for sure. Girls worship that movie.

Michelle: “Enter the Dragon," or any of those old school kung-fu movies.

Do they fold or crumple their toilet paper? Or it is a combo?

Michelle: He definitely crumples; he is always running late so that probably affects his bathroom time.

What food do they despise?

Derek: For some reason she strikes me as one of those odd people who hates bacon. And licorice. Basically, all the great things in life.

Michelle: Broccoli hater, for sure.

The magical travel troll shows up and says they can travel anywhere with only one bad tomorrow. Where do they go?

Michelle: New Zealand to work on his MMA skills.

They suddenly become dictator of their own country. What is the first thing they do?

Derek: Declares that gingers do have souls.

Michelle: He would force feed all the townspeople bacon until everyone loved bacon. Why is it so shocking that some people don’t like bacon?