Is gluten-free the way to be? 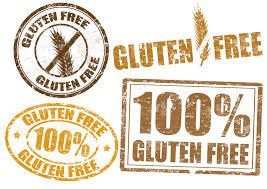 Last month, I found my mom’s beloved bread machine in a dusty, sad heap in the garage. My mind skipped down memory lane to many a family dinner where I used to happily pull apart the doughy, aromatic concoctions my Fiona Apple-listening mother created in her now fossil-like contraption. I had an internal debate. Would she notice if I innocently relocated the bread machine to my own home? Of course not. Because no one makes bread anymore at home (unless you’re Paula Deen). Humans have suddenly become enamored with removing the mythical creature called gluten from everything they consume because it supposedly has the ability to pack on pounds faster than 30 days of McDonald’s a la “Supersize Me”.

Has the term “gluten-free” been thrown in amongst culinary buzz words like “free-range” and “organic,” wrapped up in a seemingly health conscious bow and offered to the population as another standard by which to eat?

Only one percent of Americans have been diagnosed with celiac disease, the autoimmune disorder that prevents the small intestine from properly processing gluten, which leads to extreme digestive complications. So, why are the other 99 percent of Americans so fascinated by eliminating the protein found in everything from salad dressings to cupcakes?

Decision-makers at restaurants and grocery stores have taken notice and capitalized on the food trend. Currently, the gluten-free industry is a $4.2 billion market, punctuated by sugar-packed and salt-punched products lining shelves nationwide. Many incorrectly equate “gluten-free” to “grain-free,” “carb-free” and “guilt-free”. BIG no-nos.

So what’s the real deal?

Gluten, by definition, is comprised of two types of proteins: gliadins and glutenins, and is found in most grains like wheat and barley. G.F. products are not low-calorie or nutritious. In fact, they are usually significantly more caloric and are devoid of B-vitamins, amino acids, antioxidants and necessary fiber. In place of these crucial components are hidden sugars and other processed ickiness, added to compensate for the lost texture and flavor gluten provides. Afterall, gluten is Latin for ‘glue’ and is responsible for the elastic property of dough. It’s also used as a protein filler for dishes lacking in protein, especially vegetarian or vegan ones.

Other myths and food for thought

Gluten has been linked to everything from autism to diabetes, but there’s no solid scientific evidence to support these claims. Yet, 18 million people in the United States are reportedly “gluten sensitive”. Is it possible the gluten intolerance people report experiencing is actually various reactions to the GMOs present in wheat? Alas, there’s no concrete evidence, yet, to support this claim.

Backlash. Whip it and whip it good.

Then there’s the other side of the seemingly eight-dimensional gluten coin. Those who do suffer from celiac disease, which can lead to cancer or even death if ignored, are chastised because the rest of the self-diagnosed people are, well, self-diagnosed. Haters.

So, there you have it. The quick guide to living a guilt-free, glutinous existence. If you don’t have celiac disease or don’t have a gripe about grains, eat your cheeseburger with a bun this summer.